The fact that virtually all Chopin first editions were revised at least once during their commercial life­times means that close study of the music text – the most essential part of any score – and in particular of the changes made in relation to previous or later impressions must be undertaken if a score is to be reliably iden­tified. Given that such changes are often extremely abundant and thus resist exhaustive description, our approach has been to list under this heading those ‘distin­guishing musical features’ that best facilitate identi­fication of a particular score. The following principles have guided our selection:

The various DMFs have also been selected because they can be easily described and also because they appear near the beginning of a work. It must once again be emphasised that to obtain a precise image of the evolution of a given edition’s music text one must undertake a comparative, detailed analysis of the entire range of original and corrected impressions. Although such an analysis cannot be fully documented within this catalogue, the potential utility of the DMF apparatus should nevertheless be noted.

In the DMF descriptions, accidentals contained within square brackets do not literally appear in the music but are im­plied by the key signature; the same is true of accidentals in round brackets (parentheses), which are however present earlier in the relevant bar and thus apply to the DMF pitches in question. Pitch register is specified using the Helmholtz system (with superscript arabic numerals rather than primes); where rele­vant the stated register takes into account a prevailing ottava.

We have numbered individual bars as follows. Incomplete anacrusis bars at the beginning of works are re­ferred to as ‘bar 0’ with two exceptions, i.e. the first bars in Op. 38 and in the third movement of Op. 58. Where repeat signs occur, the bar numbers of first endings appear with the suffix ‘a’, while ‘b’ is attached to bar numbers of second endings (e.g. 69–1-Sam and 69–2a-Sam). Note that the bar numbering is based on the source in question and thus may not correspond to other editions which differ in content or configuration.

We employ a precise and unambiguous means of identifying individual notes and chords within a bar by defining their position in terms of the event therein. Thus, if for example the first right-hand ‘event’ is a single note, followed by an octave and then a three-note chord, these would respectively be identified as RH note 1, RH chord 2 and RH chord 3. (For reasons of economy the term ‘chord’ is also used for dyads.)

The following case study – based on Wessel’s edition of the Nocturne Op. 15 No. 2 – demonstrates how the successive corrected reprints of a given edition can be identified while also illustrating the various nota­tional features described above. The analysis hinges upon three DMFs initially found in bs 6, 20 & 32 of 15–1-W (shown here as extracts without the key signature of six sharps or treble/bass clefs for right and left hands respectively): 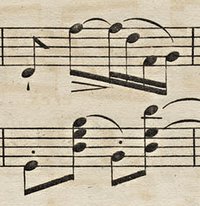 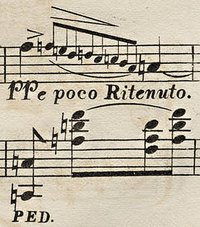 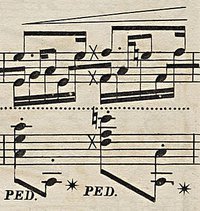 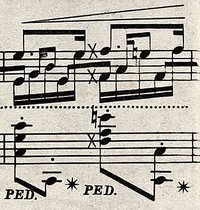 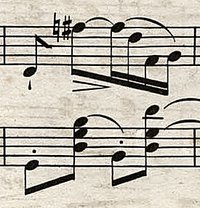 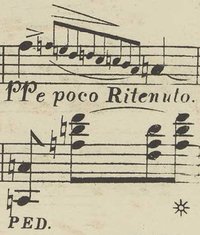 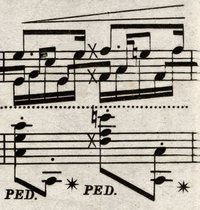 [1] The introduction of a decorative element in the SCs of 15–1d-W and later reprints has not been described for the reasons outlined in Sub-caption.